flew right to my kitchen table

A phenomenon where prices rise across the board

due to a surge in agricultural product prices

The dread of agflation is sweeping across the globe.

Grain and food prices worldwide, which were already rising due to crop recession caused by climate change and increased transportation costs due to COVID-19, have taken an unprecedented steep upturn following the outbreak of the Russia-Ukraine war. 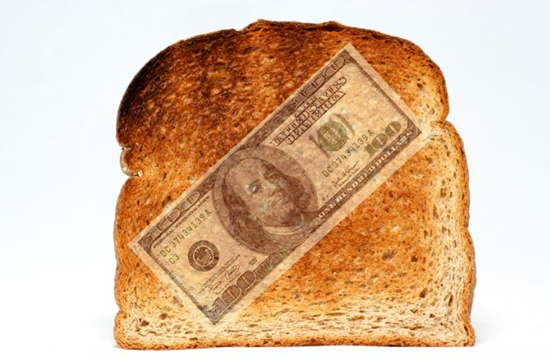 We face the most serious food crisis since World War II.

The Food and Agriculture Organization of the United Nations (FAO) announced that world food prices jumped to all-time highs in March due to the impact of the war. In particular, wheat prices are soaring. The black market price on the international market rose by 80% last year, and soared to 90% in March last month alone.

In March, David Beasley, Executive Director of the United Nations World Food Program (WFP), warned that the world would face "the most serious food crisis since World War II." 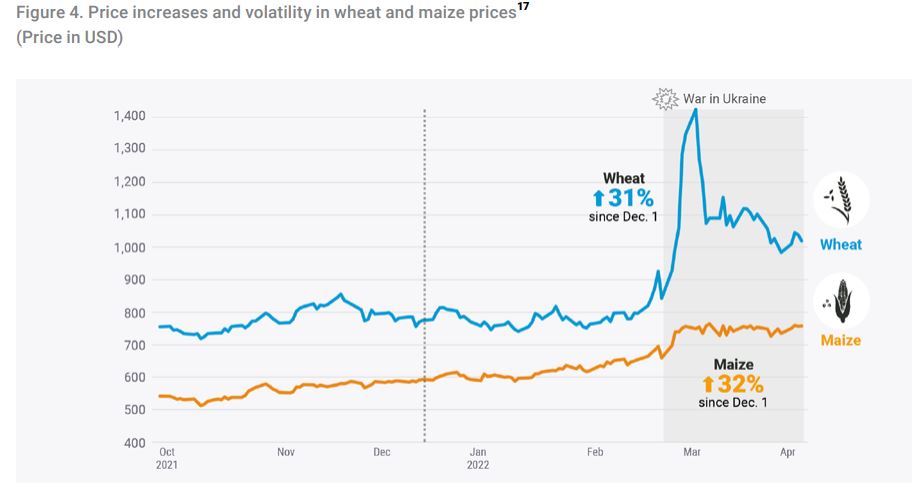 How did this crisis wind

up on my kitchen table?

Why does the war in Ukraine have such a huge impact on the dining tables of distant countries?

Ukraine is one of the world's three largest grain producers, owing to its chernozem― its fertile black soil rich in nutrients.

Russia is the world's largest wheat exporter. The two countries at war are responsible for 30% of the world's wheat supply, 20% of the corn, and 80% of our sunflower oil.

However, the war has left the black earth in southeastern Ukraine in ruins, and since farmers have fled or joined the war to defend their nation, spring sowing has been difficult and spotty. The Ukrainian Ministry of Agriculture forecasts that the area sown this spring will decrease from the regular 15 million hectares in 2021 to under 7 million hectares in 2022.

Moreover, Russia has blockaded the Black Sea inlets and harbors, through which 98% of Ukraine's grain passed for export. 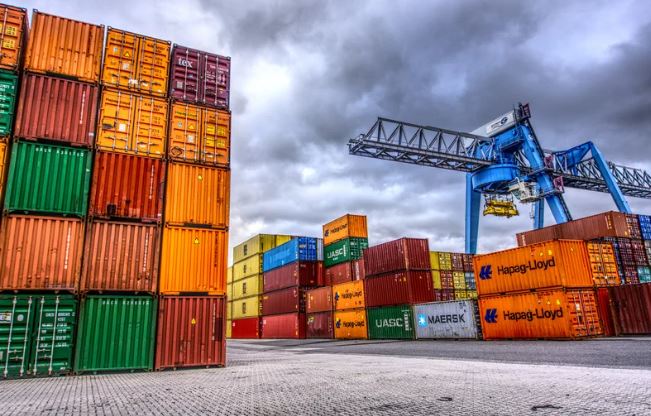 According to the Food and Agriculture Organization of the United Nations (FAO), the food price index recorded 159.3 in March, up 12.6% from the previous month (141.4). This is the biggest increase since 1996, and it jumped 33.6% in just one year. In particular, the grain price index composed of wheat, soybeans and corn rose 17.1% from February to 170.1 points. 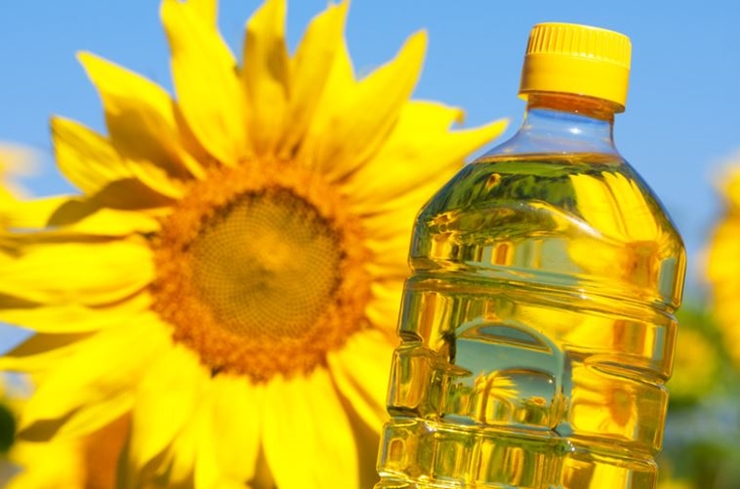 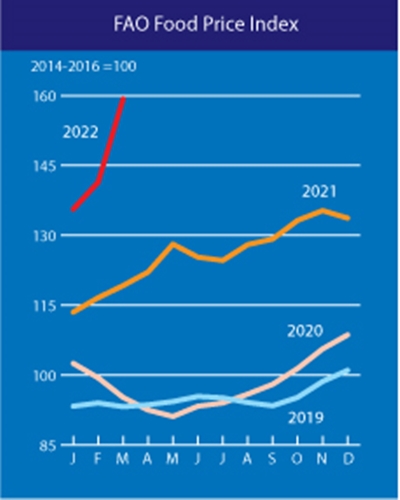 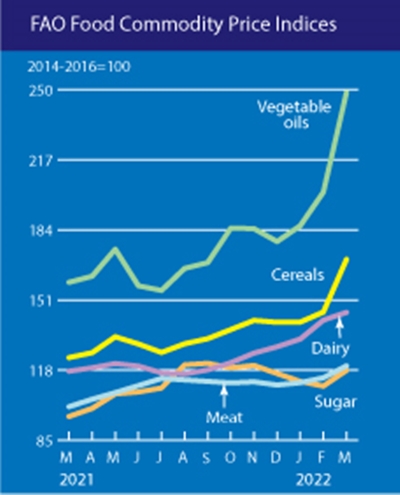 the Middle East and North Africa

Countries in the Middle East and North Africa, that are heavily dependent on Russia and the Ukraine for grain, are in a quandary.

More than half of the grain bought and sold in the Middle East originates in Russia and Ukraine. According to the Arab Reform Initiative (ARI), a specialized Arab think tank, Arab countries import 34.4% of their wheat imports from Russia and 15.9% from Ukraine. 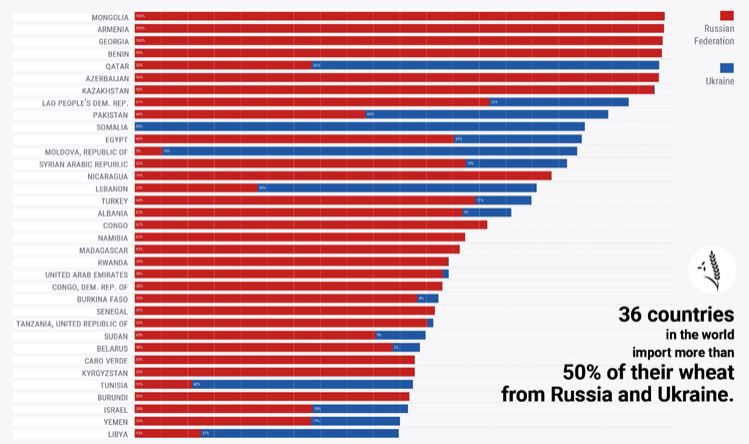 36 nations rely on Russia and Ukraine for over half their wheat imports. (Source: UN)

Egypt applied to the International Monetary Fund (IMF) in March for a bailout as the result of a sharp rise in prices, including wheat, in the wake of the war. Egypt, which already suffered a food crisis in 2008, finally took special measures on April 21st to freeze bread prices. 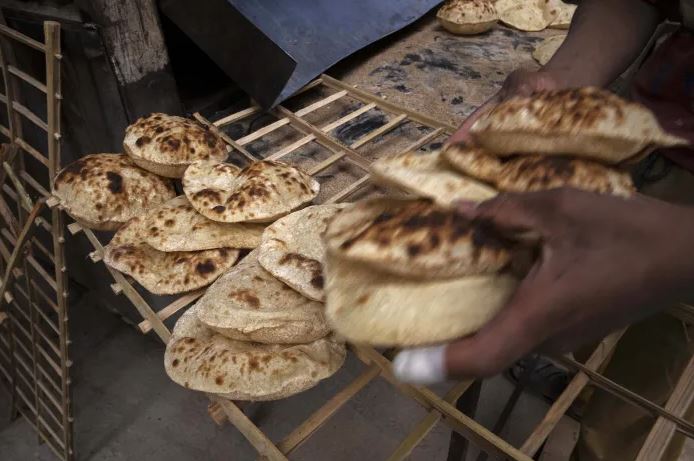 The situation in Lebanon is even worse. Lebanon suffered a painful blow when 85% of its total grain stockpile was lost in the destruction of grain warehouses from a huge blast in the port of Beirut in 2020.

Lebanon imports 80% of its wheat imports from Ukraine and Russia, and bread prices have risen by 70% compared to last year. At the same time, its currency value fell to one-tenth in two years. Finally, the IMF decided to fund a bailout for Lebanon from early April.

The famine situation is also critical in Yemen, 95% dependent on wheat imports, especially with 42% of its grain coming from Ukraine.

In Yemen, food prices have more than doubled over the past few years. Many families, struggling to make ends meet, are cutting back on or skipping meals altogether. The outlook of Yemen's food crisis is sure to be exacerbated by the war. Save the Children warns that Yemen's 8 million children face starvation. 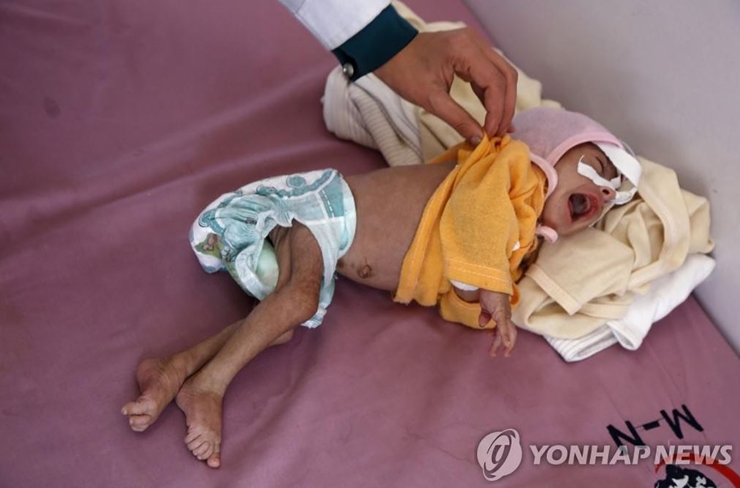 The Domino Effect of Rising Natural 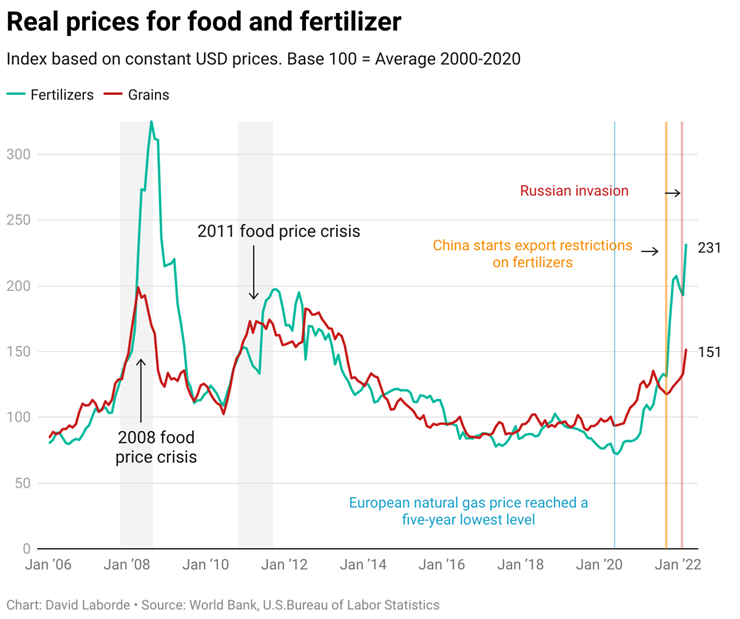 The current rise in global grain prices is reminiscent of dominoes falling one after another.

Fertilizer prices rose first. Russia is a prime exporter of natural gas―a key ingredient in making ammonia and urea, raw materials for fertilizer. Russia is also a major exporter of potassium carbonate, nitrogen, and phosphate, also vital ingredients of fertilizers (at proportions of 16%, 8% and 8%, respectively). However, the export of these raw materials has been blocked by Western sanctions.

According to International Food Policy Research Institute (IFPRI), nations relying heavily on fertilizer imported from Russia and Belarus must seek alternative sources elsewhere, but at the additional costs of longer distances and rerouting, fertilizer prices will rise significantly or become unavailable, and shortages are inevitable.

In addition, as three-fourths of the world's countries rely on imports for over half their fertilizers, the turmoil on the global market is expected to spread rapidly and affect nations not directly dependent on Russia or Belarus. 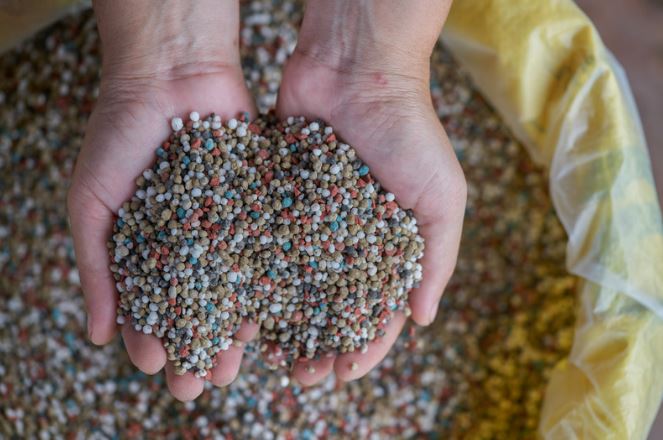 European fertilizer plants are now cut in half. If fertilizer shortages and price surges continue, grain prices are bound to rise further in the future. In the case of urea fertilizer, the price per ton is over $1,000, a nearly four-fold increase over the beginning of this year.

Importance of Ukraine and Russia in World Agriculture (March 2022) 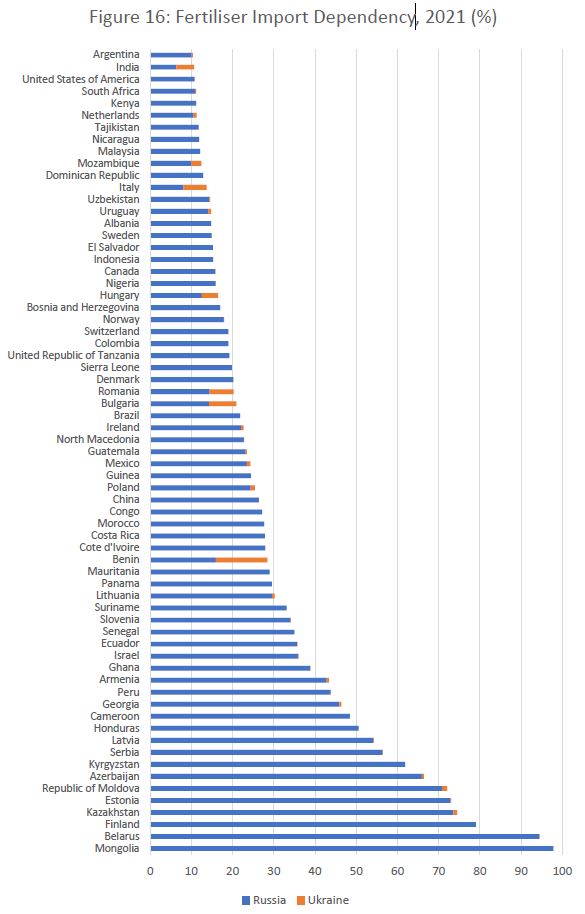 Nations depending on fertilizer from Russia and Ukraine (Source: UN) 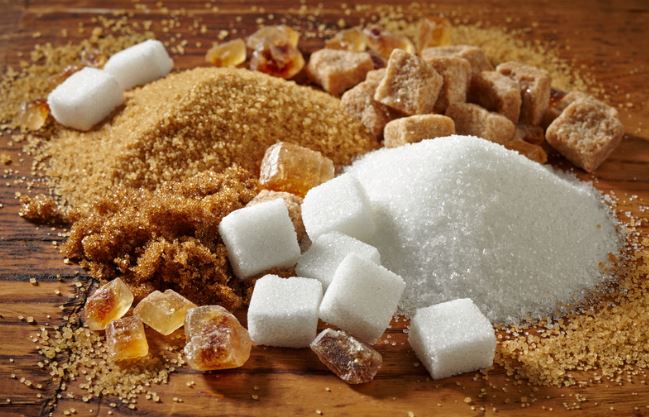 Not only grain prices―all food prices are rising together. According to the FAO Food Price Index for March, the sugar price index, rebounded 6.7% from its previous downward trend, and is now 20% higher than one year ago. The meat price index also rose 4.8% to a record high on the back of a surge in pork prices in Western Europe. The dairy price index was up 23.6% from March 2021.

No food exports! Countries close their 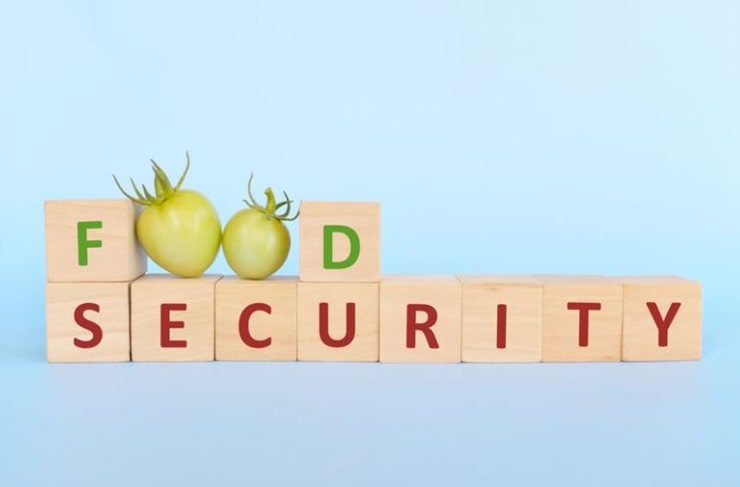 Countries are closing their warehouses and strengthening food security. Egypt, the Arab country with the largest population, has banned exports of wheat, flour, lentils and soybeans for three months amid growing concerns about a shortage of spare parts. 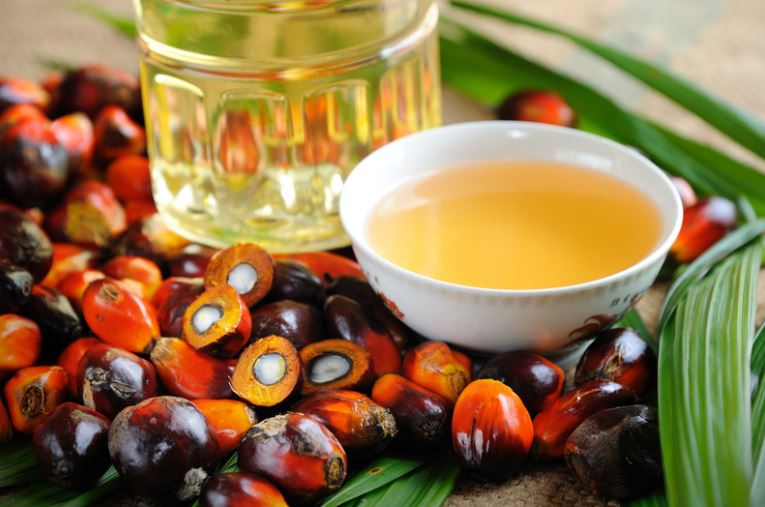 According to International Food Policy Research Institute (IFPRI), nations restricting food exports after the Ukraine war have increased from 3 to 16 as of April. Beside Russia and Ukraine, nations limiting exports include Indonesia (palm oil), Argentina (beef), Turkey, Kyrgyzstan, and Kazakhstan (grain). 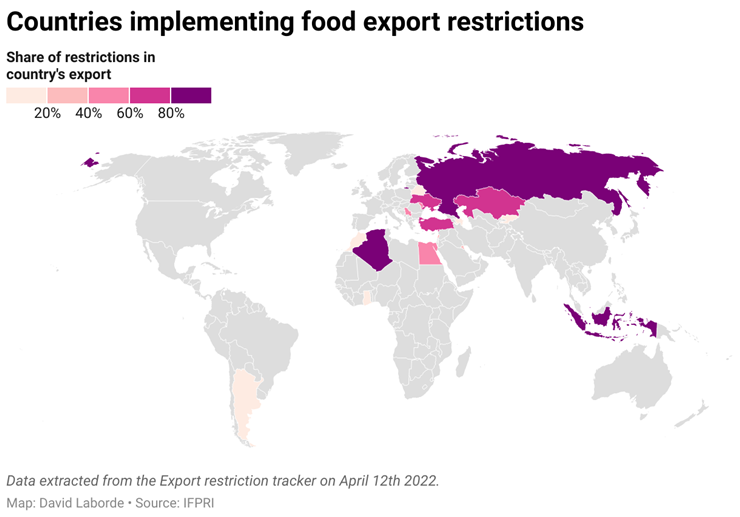 Export restrictions and global food insecurity due to war (April 2022)

Agriculture ministers of the G7 nations criticized food export restrictions on March 11. "We will take whatever measures necessary to respond to and prevent the food crisis."

(Lining up for food and oil rations in Afghanistan: WFP photo)

In the March report, 44 countries worldwide stated they need external food aid. Among these, 33 African nations account for 75% of those in need of assistance. The list includes 9 countries in Asia and 2 nations in Latin America and the Caribbean. 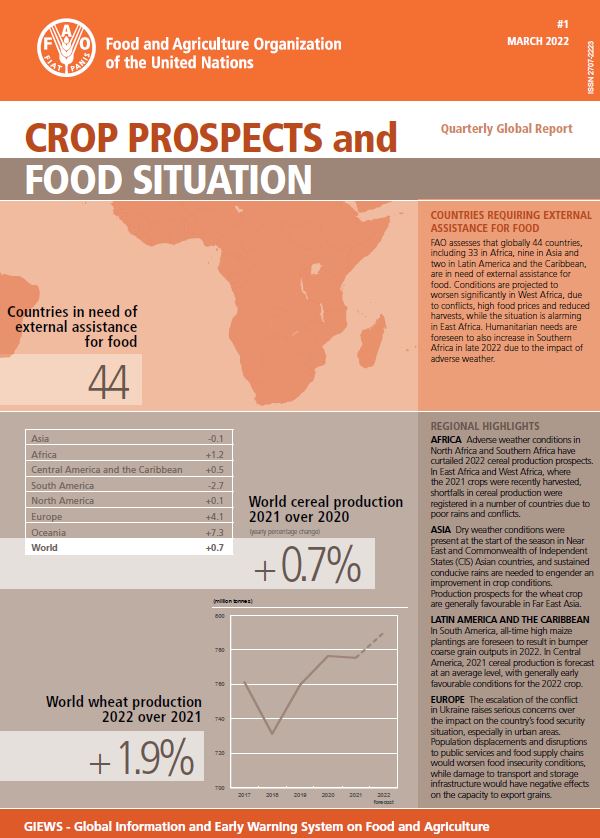 WFO data published April 7 shows that 720 to 811 million worldwide suffer severe hunger, and 2.37 billion people did not get adequate nutrition―an increase of 320 million over the previous year 2021. 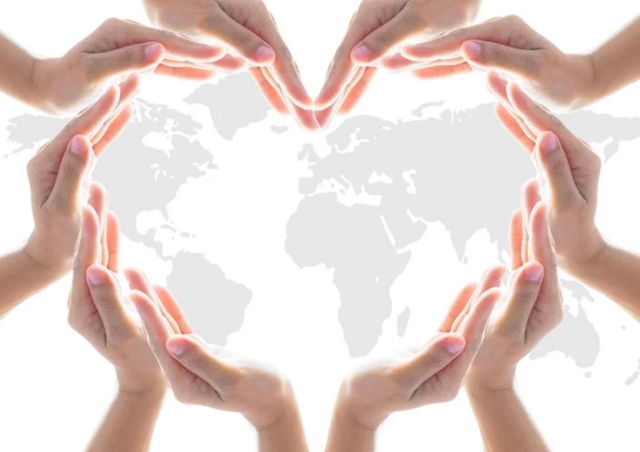 The heads of the four organizations stated, “It is imperative we provide prompt assistance to nations with food insecurity in a cooperative manner. We are ready to work with our multilateral and bilateral partners to help the countries resolve this urgent crisis.”

- Financial aid to households and countries

- Open up the world food and fertilizer trade

- Break free of dependence on Russia and Ukraine; seek new and diverse suppliers 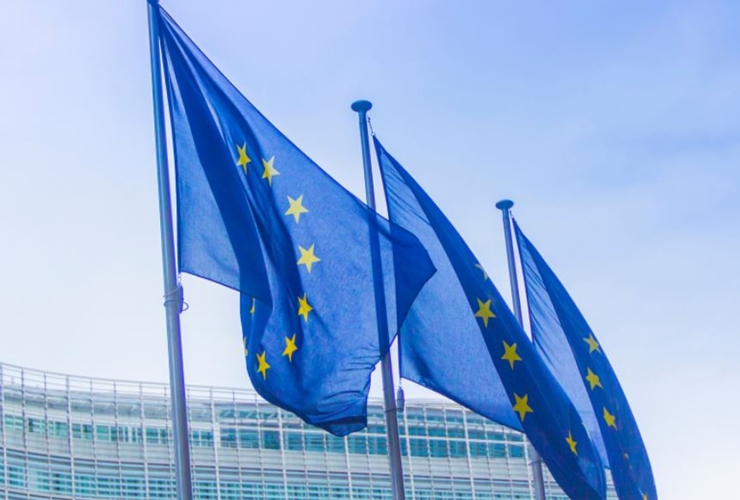 The European Union (EU) has also stepped in. On March 23rd the European Commission offered 330 million euros in emergency aid to Ukraine to alleviate their people’s suffering from the Russian invasion.

The European Commission issued the statement: “Now is the time for Europe to show its solidarity: to help Ukraine, its people and farmers, as well as vulnerable food-importing countries around the world that face surging prices and potential shortages. We are committed to taking all necessary steps to contribute to global food security, particularly in Ukraine, North Africa and the Middle East, as well as in Asia and sub-Saharan Africa.”

- Open up the world food and fertilizer trade

- Support for refugees and vulnerable groups in Ukraine

- Reinforcement of transparency and information provision on global market conditions

The voices of international organizations responding to the global food crisis are unanimous: We must deal with it jointly.

Today's world is tightly connected. The impact of each country's actions on other countries is different from the past. The stronger the country in the field, the greater the impact, and the weaker countries are inevitably suffering heavy damage.

We are now in an era when prompt and international cooperation is needed more than ever.