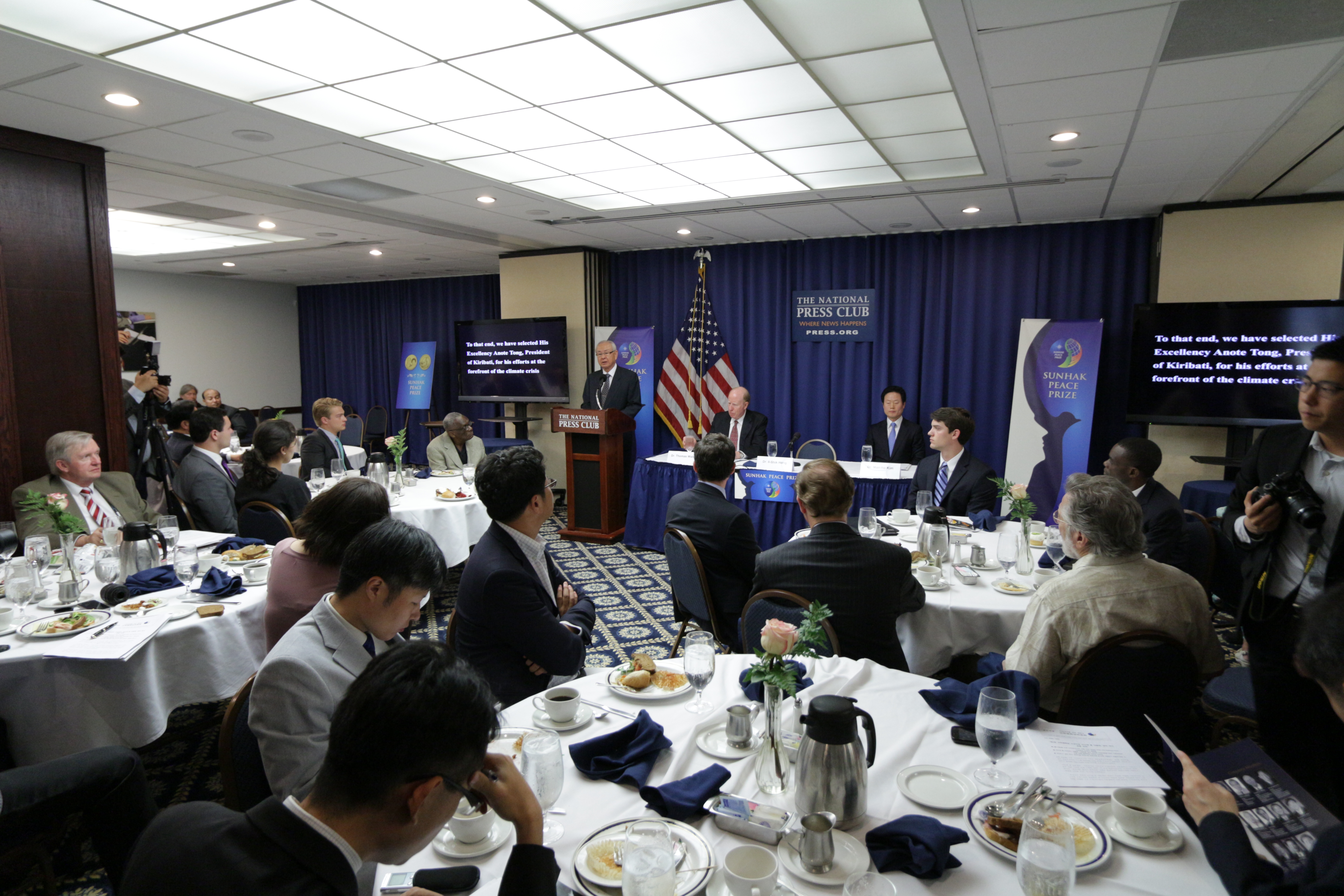 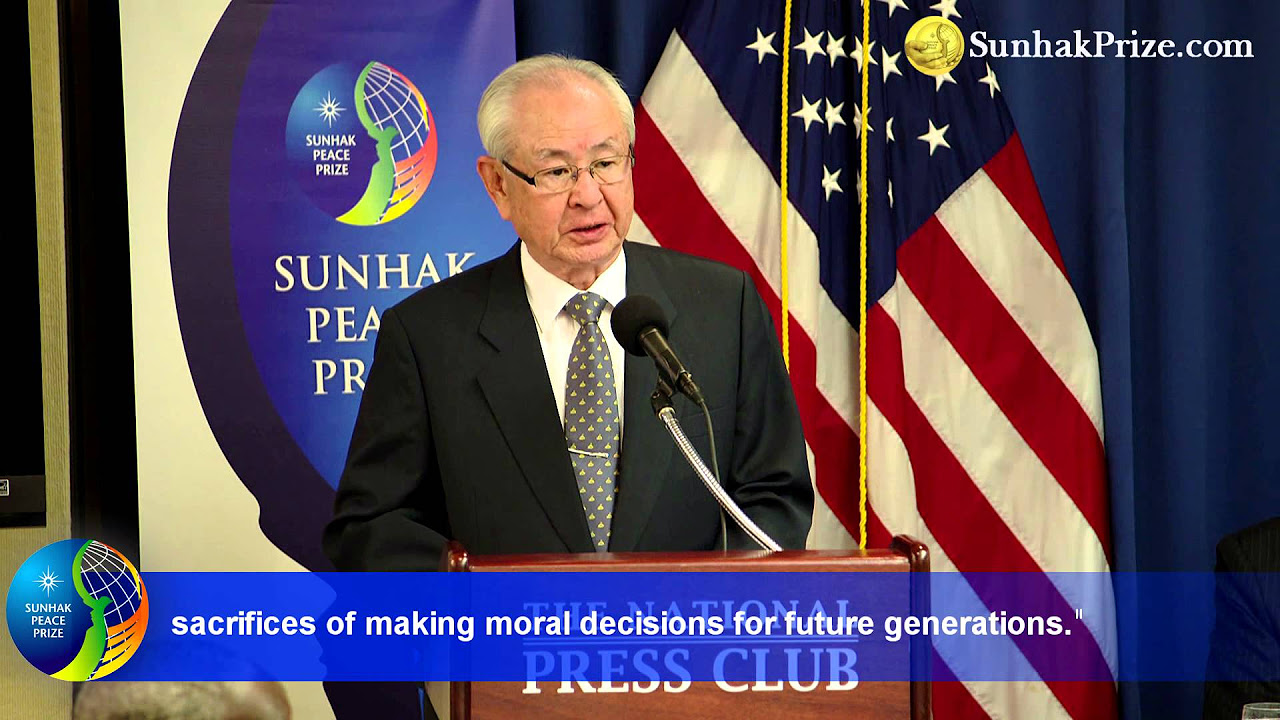 Good afternoon. The Sunhak Peace Prize was established based on the belief that it is this generation’s responsibility to create a peaceful civilization for future generations. With this vision in mind, the Sunhak Peace Prize Committee, which I chair, focused on the pressing need to combat climate change and food security to lay the groundwork for lasting peace. To that end, we have selected His Excellency Anote Tong, President of Kiribati, for his efforts at the forefront of the climate crisis, and Dr. Modadugu Vijay Gupta of India, for developing innovative fish farming methods as an alternative solution to the future food crisis and for inspiring the Blue Revolution. They are the first laureates of the Sunhak Peace Prize.

His Excellency Anote Tong, President of Kiribati, has been raising public awareness of the serious effects of climate change and is leading the search for a global solution. With his country’s survival under threat, President Tong is presenting an optimistic and constructive vision dedicated to future generations.

An island nation located in the Pacific, Kiribati is a country on the verge of being submerged under water due to rising sea levels. President Tong is drawing the attention of and is playing a central role in gathering support from the international community to seek solutions to actively cope with the impacts of climate change. Also, President Tong has designated part of Kiribati's Exclusive Economic Zone in the Pacific Ocean as a marine protected area to safeguard it from pollution caused by human greed. Through the “migration with dignity” vocational education program, he is investing significant energy into defending the human rights of his citizens fated to leave their homes, which will be submerged within the next 30 years.

It is rare that a leader takes the initiative to prevent and address a global catastrophe such as climate change by making sacrifices. The Sunhak Peace Prize Committee strongly supports the efforts and appeals of President Tong who stated that “In order to respond to the climate change crisis, the people of today must endure the patience and sacrifices of making moral decisions for future generations.”

Throughout his life, Dr. Modadugu Vijay Gupta has been addressing the future food crisis by developing aquaculture methods that benefit small-scale farmers. The methods he has developed have helped countless people in poverty in Southeast Asia and Africa achieve independence and self-sufficiency. In particular, he has significantly improved the social status and rights of women.

Setting up camp in war-torn conflict areas and ignoring threats to his own life, Dr. Gupta has devoted himself to developing environmentally friendly aquaculture methods/technologies using agriculture wastes and by-products along with innovative implementation practices that benefit small-scale farmers. As a food resource providing low-cost, high-quality animal protein, aquaculture has become a possible solution to the future food crisis. In addition, rather than giving fish to the poor, Dr. Gupta taught them how to fish, paving a way for them to achieve independence and self-sufficiency. By doing this he has paved the way for independence and self-sufficiency, particularly among Southeast Asian and African women, whom he taught aquaculture to, greatly improving their social status and rights.

His efforts are based on his love for humanity and his spirit of respect for the lives of those suffering from poverty and hunger. The Sunhak Peace Prize Committee salutes Dr. Gupta's dedication and service to addressing the food crisis facing humankind and giving the poor a sense of hope.

The Sunhak Peace Prize Committee wishes to present a future peace agenda with every prize presentation as thematic focuses, that will help lead the human community towards peace. For the inaugural Sunhak Peace Prize, the Committee proposes the future peace agenda ‘climate change’ and ‘food resource’ as its thematic focus. The main challenge to world peace in the past century were conflicts and war. However, in the 21st century, catastrophes due to climate change and the food crisis are constantly occurring throughout the world. Unless these problems are solved, they threaten the survival of humanity. Indeed, climate change and food security are the greatest challenges to world peace in the 21st century. Therefore we feel that actively seeking for solutions to these crises should be our top priority future peace agenda.

Now, drastic action based on moral legitimacy and rationality is needed from the human community. It is our hope that this broad vision will help us move one step closer to realizing a 21st century civilization of peace.

“The OCEAN is essential to the future peace of humanity”

The Sunhak Peace Prize for Future Generations focuses on the ocean for the 2015 Award Ceremony.

In the 20th century, the causes threatening the peace of humanity were wars and conflicts between regions.  However, in the 21st century, the complex problems that threaten peace, such as climate change, the food crisis, energy depletion, water scarcity, population growth, urbanization, etc., are all globally linked, and threaten the very survival of humanity.  In particular, climate change and the food crisis are the greatest challenges to peace in the 21st century.

The ocean, covering 71% of the Earth, has not only an absolute climate regulation function, but also enormous food and resource supply capabilities.  Thus, it is truly a treasure chest essential to peace and human development for future generations.

WASHINGTON D.C., June 8, 2015 – Indian fisheries scientist Dr. M. Vijay Gupta and President Anote Tong of the South Pacific island nation of Kiribati have been selected to receive the inaugural Sunhak Peace Prize, a prestigious award given annually to individuals and/or organizations that contribute to global peace through their commitment to environmental sustainability and innovative solutions to conflict-causing crises.

The two awardees will be honored at a ceremony in Seoul, South Korea, on August 28, 2015. Each will receive the Sunhak Peace Prize medal, certificate and a cash prize of $500,000.

The 2015 Prize celebrates and seeks to promote the link between sustainable development practices and global peace and justice. In the 20th century, peace was threatened by world wars and regional conflicts. The threats to peace and human security in this century prominently include not only territorial disputes and the rise of extremism, but also climate change and its impact on food security and clean water for the world’s most vulnerable citizens. The Prize emphasizes the critical role of interfaith and international cooperation based on respect for human rights as an essential foundation for peace.

Dr. Gupta is a renowned researcher from India who spent his career creating innovative ways to feed the rural poor by developing and disseminating techniques for low-cost fish farming. For his achievements, Dr. Gupta won the 2005 World Food Prize. He served as the assistant director general at WorldFish, an international fisheries institute located in Malaysia.

President Tong’s Kiribati is a collection of 34 atolls and islands 2,500 miles south of Hawaii. Half of Kiribati’s 103,000 citizens live on Tarawa Atoll, which has an average elevation of less than seven feet above sea level. Studies show that the ocean is rising around Kiribati at the rate of three millimeters a year, more than twice the global average. President Tong has drawn international attention and respect for his tireless warnings about the danger of rising seas that results from climate change. His nation could be uninhabitable by the 2050s.

“We are honored to announce that the first Sunhak Peace Prize will be presented to these two deserving individuals,” said Il-Sik Hong, former president of Korea University and chairman of the Sunhak Peace Prize Committee. “Dr. Gupta and President Tong are worthy Laureates because they have made the world a better and more peaceful place. Hunger, poverty and climate change lead to global conflict and human suffering, and both men have devoted their lives to furthering peace by finding sustainable solutions to these pressing problems.”

Dr. Gupta is an Indian fisheries scientist known as an architect of the “Blue Revolution” – or the productive use of ocean resources – and has been a leader in teaching the rural poor how to fish sustainably. His aquaculture methods have dramatically reduced hunger in Southeast Asia and have empowered rural women with low social status.

President Tong, in an effort to preserve his nation and its threatened way of life, has designated 408,250 square kilometers of his country’s waters as a “marine protected area.” To prevent his people from becoming climate change refugees, he has instituted vocational training for a “mass migration with dignity” plan. Nurses and technicians have begun to resettle in Australia and New Zealand. President Tong bought 2,000 hectares of land in Fiji last year and is considering relocating his population.